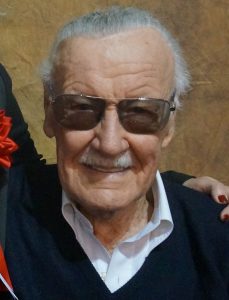 A massage therapist, an inappropriate sexual behavior and Stan Lee of Marvel Comics

The massage therapist Maria Carballo says Stan Lee of Marvel Comics fondled himself and inappropriately grabbed her during arranged massages at a Chicago hotel in 2017.

Maria Carballo was working as an independent contractor for Therapy Professionals, which asked her to give massage therapy to a client for two hours April 21, 2017, at the McCormick Place Hyatt Regency.

Stan Lee was on his stomach for the first part of the massage, and after about a half hour, Maria Carballo noticed he was fondling himself.

Kim Kardashian posted racy photos to promote her latest fragrance, KKW Body. The stunt, which inches dangerously close to full-frontal nudity, caused one Twitter user to joke that the scent would be “salmon” flavored.

Over the years, the city of Joliet has grown and expanded significantly and so has the city’s fire protection area. The Joliet Fire Department had never employed a female firefighter at any of the city’s nine stations. Attempts to hire a female firefighter a few years ago ultimately met resistance and did not materialize. But history changed this week under the administration of first-term Mayor Bob O’Dekirk.

Murder-suicide: a wife shot a woman she believed was having an affair with her husband

“Jennair Gerardot went to great lengths to disguise herself. She wore a wig, and took a train from Delaware to Radnor. She broke into the victim’s house, and cleaned up the glass so the victim didn’t realize someone was in her home.”

Melania really does not want to hold Donald Trump’s hand

It was the third time that cameras caught the president’s awkward attempts at holding hands with his third wife.

During a visit to Israel in May 2017, Trump tried to hold hands on the tarmac as they arrived — but Melania deftly swatted his hand away.

In February, Trump tried yet again as they walked side-by-side toward Air Force One in Ohio.

Major League Baseball’s inaugural FoodFest in Manhattan featured a signature dish from every single MLB ballpark, and NYPost.com senior reporter Michael Blaustein was there to try all 30 of them. From a surprisingly solid NY Deli Pastrami Sandwich from the Mets to tangy Toasted Grasshoppers courtesy of the Mariners, the sold-out festival had everything a fan could desire.